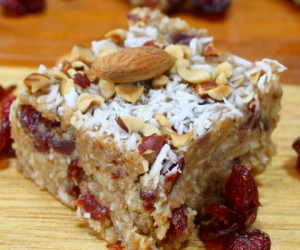 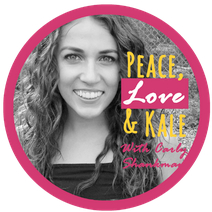 Preheat the primal cooking fire (oven) to 350 degrees and toast the nuts until golden brown stirring occasionally. Watch them carefully, they’ll go from golden to black fast! Once they are toasted nicely, toss them in the stone grinder (the food processor or blender), and give them a few pulses until they are a coarse meal.  Stir into the nut flour in a medium bowl and add the dried coconut and mix well.

On the stovetop, melt the coconut oil and almond butter – stir them together well. Remove from heat & add the honey, vanilla, and salt then mix until creamy. Fold the nut mix into the honey mix and add the dried fruit. Pat into an 8 x 8 baking dish (coated with coconut oil) and stick in the ice cave (fridge) for 1 hour or more till nice and solid.  I like to top mine with a little extra dried coconut before placing in the fridge.  Cut into squares and try not to grunt when eating. Keep in the ice cave to store.